All fifty students of the Academy of Aerospace and Engineering went on a field trip to the Intrepid Air and Space Museum in New York City on October 20th. Field trips can be good or bad, depending on where you go, how it fits with the curriculum, and the timing. This field trip worked out superbly–the Intrepid offered an array of activities for learning, all of which fit perfectly with our curriculum, and we spent almost four hours there and got a full, in-depth experience.

Ms. Garavel and I planned the trip to make it a student-centered learning experience. Rather than hire a tour guide and have fifty students shuffling around  trying to hear someone talk, we gave the students the opportunity to set goals, and we gave them specific questions to research on the trip. Before the trip, we had the students read about the Intrepid so they knew roughly what to expect. On arrival, we put each 8th grade crew (group of about four students) with a 7th grade crew, making six groups with eight to ten students each. We put a chaperone with each of the six groups, then we gave each group a list of six stations around the Intrepid where each station required the students to answer one or more questions related to the exhibits at the station and related to their curriculum. Here is the list of questions at the stations: student-activities-at-stations-on-intrepid-air-space-museum.

We did a “shotgun” start where Crew One went to Station One, Crew Two to Station Two, etc., and the entire exercise took about three hours. After that, the students had about a half hour to look around at anything they wanted to see again and to buy souvenirs at the gift shop. Ms. Garavel, the other chaperones, and I all thought the plan worked out well. We had the students do a reflection activity the next day in class, and the feedback was universally positive. Here are some of the things students said about the trip:

“After going on the field trip yesterday, I think that I personally had a great experience on the Intrepid. I got to see all sorts of different aircraft from different time periods. It helped me realize how much aircraft from the past changed in such a short time compared to the aircraft that the military uses today. Another thing that I enjoyed doing was just walking around with my group and just experiencing the whole trip by looking around and reading the information that was everywhere. Also, I enjoyed learning more about the Intrepid and what missions it did and overall the ship’s story. My goal for this field trip was to learn more about the Vietnam War Era, and they had a whole exhibit on that subject so my goal was met. Overall I thought that this was by far the best field trip that we have gone on in the Academy and I hope to have more great experiences like that in the future.”

“The Intrepid was a good destination for our academy for many reasons. One reason why the Intrepid was a good destination for out academy is because everything there had to do with something that we are learning or what we are going to learn in the academy. For example, they had airplanes there with information about them, and we learned about airplanes, so when we went we applied our learning to the aircraft like identifying the parts of the airplane and what the parts do. To add on to that sentence it was nice that we actually understood what we were talking about with what the information said because I went when I was younger and didn’t understand anything but when we went yesterday I understood everything.”

“First of all, I really liked the field trip. It was amazing to see how big the Intrepid really was and how many planes it could carry. While on the trip, I learned what the daily life of a person on the ship was and how the planes stopped with such a short distance. Throughout the whole trip I was fascinated by the fact that the vessel I was standing on was active during one of our nation’s wars and that some very important people stood right where I was standing. I met my goal because when I went home to tell my parents about the trip they said that they would want to go maybe next summer or April break. I think the trip was made even better by the fact that we had flown a couple of the planes we saw in the simulator and then to see them in real life was fascinating.”

“The Intrepid was a good destination for the academy because it had many of the things we were learning about. It showed them in real life and allowed us to see things in real life that we had been learning researching, and talking about in the past few months. We actually got to see that planes we had been researching, and got to do hands on activities that pertained to things we actually knew about…I think it was a good field trip and I got to learn about everything I wanted to and a few other things that I didn’t know were there.”

“I think this was a very interesting and a fun place to go to. To see in person things used in war and to learn about them was awesome. The movie that was showed helped a lot in explaining the Intrepid’s experience in war, its importance to the war, and what the people serving our country did to protect it. I also liked going into the submarine even after the long wait in line to see how people had to live. The space part of the Intrepid was also an awesome thing to see. To see the size of it in person was a beautiful experience. I am very thankful for the sacrificing people who have used themselves to protect our country and have let us see the Intrepid today.”

“I think that the Intrepid was an absolutely amazing field trip for the academy! The main reason being that it was relevant, but a lot of things are, so why do I think that this in particular was amazing? Well, this was great because we actually got to see these aircraft in real life, some of the ones that we learned about, or did reports about, or even ones we made our models of! I learned so much!”

“Yesterday’s field trip to the Intrepid Air and Space Museum was a very cool and fun experience, showcasing the cool planes and even some members of the ship that fought in Vietnam. During our trip to the Intrepid, not only did I learn about what the ship was doing and all these cool facts about it but I also learned how much I actually knew about all these planes including naming what some of them were and more, surprising myself each time I knew what something was.”

“This was a great trip for the academy because you taught us everything that was related to all the stations we went to.”

“I think that the field trip that we took yesterday was the best one that we had. I really liked how we were split up so we got to go with a smaller group of people so it was easier to learn. I learned a lot yesterday, especially about ship life. First when we first walked to the ship the size of the ship really blew me away. The Intrepid was way bigger the I thought. One thing that I learned was on ships you are always doing something. What I mean is that if there is an emergency, everyone helps, every one is doing something to help.”

“The Intrepid was a good destination for the academy. Since we are learning about planes and forces that affect them, what better a place than a ship that carried planes and had special systems for takeoff. I learned a lot about planes and the ship itself. For each plane on the flight deck, there was an explanation of the planes flight controls and the kind of things it was used for. The most interesting thing i learned was how the planes took off from the flight deck.”

“I really enjoyed this field trip. I thought it was a great experience to see so many things about what we are learning at once. I thought that it was good to have the questions that you had us complete, because if we didn’t we probably would have been bored and wouldn’t have learned as much.”

“I really liked the field trip yesterday because of the way everything was organized and everything we got to see.”

“I really liked the field trip yesterday to the Intrepid, I thought that it was a really good experience. Not many people get to go on this trip because of the cost and mostly because of the travel…Overall this was a great field trip probably the best in the academy because we learned a lot and it was fun. You should continue to do this trip with the future classes.”

“I liked going to the field trip to the Intrepid. It was a good learning experience. I ended up meeting my goal about learning more about the aircraft carrier. What I did like was getting to do everything with the seventh graders. It was an interesting experience. Sometimes they would go ahead or they would stay behind but it was good showing them what to do and showing them the expectations on field trips.”

“Overall, I enjoyed this field trip very much, it was probably my all time favorite one. I learned about many different things as we went along different stations…I really liked the field trip, and I liked how it was organized.”

Here are some photos from the trip: 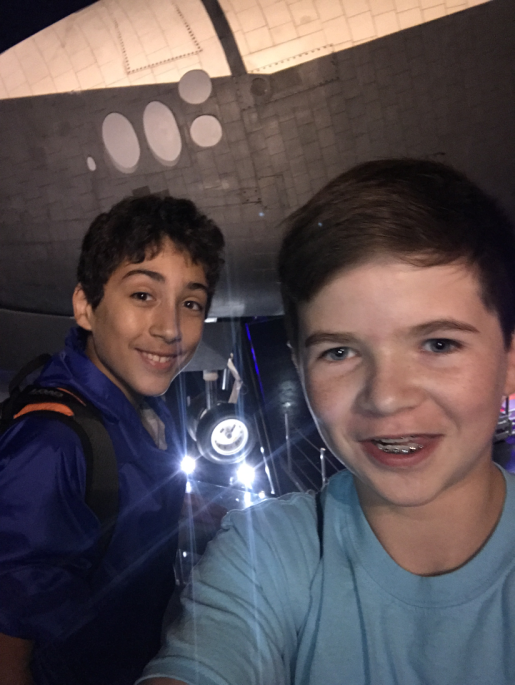 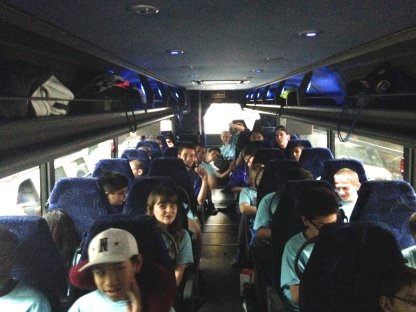