This week, the Academy of Aerospace and Engineering hosted its first guest speaker, Captain April Krason of the Civil Air Patrol (CAP). As she explained, CAP is the official auxiliary of the US Air Force. It was founded at the start of World War II as a volunteer organization of flyers who helped patrol the US coastline for German submarines. Since then, it has evolved into an important agency in US homeland security. It also has a robust youth program, or “Cadet” program, open to young men and women between 12 and 18 years old. From the CAP website: “The CAP Cadet Program is a year-round program where Cadets fly, learn to lead, hike, camp, get in shape, and push themselves to new limits. If you’re dreaming about a career in aviation, space, or the military, CAP’s Cadet Program is for you. Cadets meet 2 hours per week and one Saturday per month, on average, and also have opportunities to attend leadership encampments, career academies, and other activities during the summer.” She explained that CAP Cadets earn up to ten free orientation flights. I also know that they tend to earn scholarships and get selected for excellent colleges because of their demonstrated leadership, citizenship, and community service. For students with an interest in aerospace, especially in flying, this youth program may be the right one for you. Connecticut has several CAP units, three of which are close to Newington:

In an earlier post, I described the Experimental Aircraft Association (EAA), focusing on Chapter 27 at Meriden-Markham Airport in Meriden, Connecticut. The EAA’s mission is “To grow participation in aviation by promoting the ‘Spirit of Aviation,’” while their vision is “A vibrant and growing aviation community.” To carry out this mission and vision, EAA sponsors some youth activities, including the Young Eagles program where EAA pilots spend a day giving free orientation flights in their aircraft to children ages 8 to 17. The purpose is to trigger an interest in aviation that young people will carry forward in life. So far, the EAA has given about 2 million orientation flights to children nationwide since the start of Young Eagles in 1992. The next Young Eagles day for EAA Chapter 27 is Saturday, October 17th (moved from October 10th), 9:00 AM to 3:00 PM, at Meriden-Markham Airport. Click HERE for more information and any updates on this event, as well as the point of contact. The EAA is a great organization for anyone interested in aviation, regardless of whether you are a pilot or own an aircraft. One project the Meriden squadron has started is to have local youth help build an airplane. I have invited the EAA Chapter 27 president, Mr. Bob Spaulding, to speak to our students on September 18th so they can learn more about these opportunities.

Finally, for those interested in flying radio-controlled (R/C) aircraft program, I have invited the Academy of Model Aeronautics (AMA) local chapter, the Central Connecticut R/C Club’s president, Mr. Damon Rosenthal, to speak to our students on October 9th. Earlier this summer, I posted how I went to the club’s “Fun Fly Day” at their field at 100 Meadow Road, Farmington, Connecticut. I watched club members, including several youth members, fly their aircraft–everything from 1/4 scale replicas of old warbirds to small, simple airplanes made from foam board. The club also oversees proper flight operations of “drones,” the latest craze in remotely piloted aircraft. All model flying is done following AMA’s safety rules. Beginners take lessons and get checked out by an instructor before they can operate their aircraft on the field. For anyone who has always wanted to fly, this is an alternative way to do it, and do it right.

DISCLAIMER: As the teacher in the Academy of Aerospace and Engineering, I am providing this information for my students and their parents/guardians to use as they see fit. None of these organizations are being officially endorsed or pushed by Newington Public Schools. Participation in any of these programs is completely up to the students and their parents/guardians, and there is no requirement by the Academy for a student to join any of them. All of this being said, I think these organizations offer many opportunities, and I hope you find this information useful.

Over the past couple weeks, I have wanted to learn more about “drones,” a term that I found out is incorrect – the proper term is remotely piloted aircraft, or RPAs. Before these modern aircraft were in the news, they used to be just radio controlled aircraft, or R/C aircraft. What’s the difference? Drones are unmanned aircraft typically used for target practice. RPA’s are sophisticated aircraft used for many different missions and piloted by a crew on the ground using satellite signals. R/C aircraft are simply model aircraft flown using a remote control system that transmits the control signal from a handheld controller to the aircraft using a radio signal. For the Academy of Aerospace and Engineering, flying small scale R/C aircraft will be part of the curriculum. Initially students will fly store bought models, then they will design and fly their own creations. To teach all this, I am getting proficient in R/C aircraft operations so we have a safe and instructive program.

The first thing I am doing is getting proficient with the R/C aircraft I got for the Academy: UDI R/C four-motor helicopters with cameras. These are sometimes called “quadcopters,” another incorrect term–quadrotor helicopter would be more correct. They have a simple onboard camera that takes photos and videos that can be downloaded after flight. They are simple to fly, and they give us a great way to learn about remote sensing, a major unit we will study in the spring. This photo of me in my backyard was taken using one of these aircraft.

The other thing I am doing to ensure we have a safe and effective R/C aircraft program is to join the Academy of Model Aeronautics (AMA) and to partner with a local chapter, the Central Connecticut R/C Club. Today, I went to the club’s “Fun Fly Day” at their field at 100 Meadow Road, Farmington, Connecticut. I met the club president, Damon Rosenthal, and watched club members, including several youth members, fly their aircraft–everything from 1/4 scale replicas of old warbirds to small, simple airplanes made from foam board. The flying is done following AMA’s safety rules. Beginners take lessons and get checked out by an instructor before they can operate their aircraft on the field. For anyone who has always wanted to fly, this is an alternative way to do it. The following photos are from today’s event. The club is also hosting another big event on National Model Aviation Day on August 15, 2015–any one is welcome to stop in and observe the flying and learn more about this sport. I also invited Mr. Rosenthal to give a talk at the Academy this fall to help our students learn about R/C aircraft flying and the club. 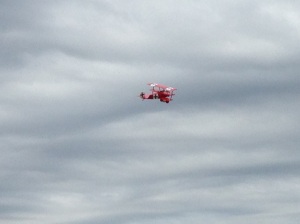 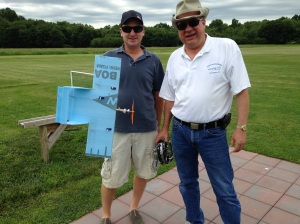 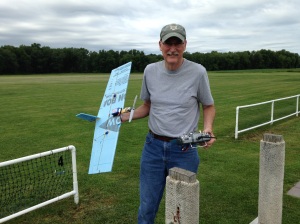