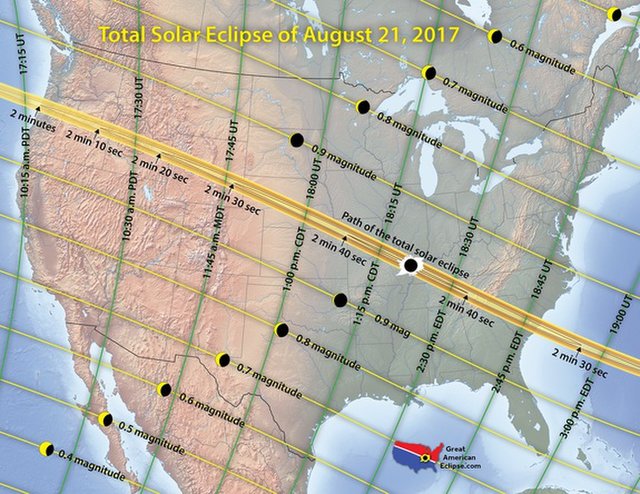 Students and their families of the Academy of Aerospace and Engineering are invited to an eclipse viewing outside of the academy facility on Monday, August 21st during the partial eclipse over our part of Connecticut from 2:00 to 3:30 local time (Eastern Daylight Time)–the peak is at 2:45. A couple weeks ago, I tweeted a link to a Space.com article that gives an excellent interactive map and explanation of the eclipse, so if you are somewhere else in the US, you can use this to plan your viewing. My recommendation is to make a projection viewer, not to use the eclipse “safety” glasses. I’ll explain how to make a projection viewer, then I’ll explain why the glasses are a bad idea.

A projection viewer puts the image of the eclipsing Sun on a screen where you can see the image magnified and dimmed so that it’s safely and easily visible with the naked eye. The simplest projection viewer is using a box where you poke a pinhole in one side to let the Sun’s image through, then tape white paper to make a screen on the facing inner side of the box. You also need another opening where you can look through and see the image on the screen. Here is a NASA video that shows how to make such a viewer using an empty cereal box. A smaller and cleaner pinhole makes a clearer image, and a longer box (between the pinhole and the screen) makes a bigger image. If you look through and aren’t happy with the image, experiment with the projector to improve it — you have about an hour where the Moon is clearly overlapping the Sun, so it’s plenty of time to make changes. One major safety tip: DON’T LOOK THROUGH THE PINHOLE AT THE SUN. To aim the Sun through the pinhole, you just need to hold the box so its shadow is as narrow as you can make it–this means the box’ top where the pinhole is placed is squarely facing the Sun.

Another type of projection viewer is using a telescope to project the Sun’s image onto a screen. The advantage of the telescope is that it will make a much bigger image in a shorter distance due to its magnification, and it allows you to focus the image. Our academy telescopes have 90-degree eyepiece mounts that make them ideal for this purpose since we can project the image sideways into an open topped box with a big screen, and the sides of the box shade the image so it’s very visible. Here are photos from a previous post where I show how we did this to view sunspots earlier this year.

If your telescope does not have a 90-degree eyepiece mount, then make a hole in one side of a box to fit around your telescope so that the eyepiece points into the box and projects the image on the opposite inner side of the box. Sky and Telescope gives a good description of several ways to project the image in this article. A couple safety tips using a telescope eclipse viewer:

Finally, what about the eclipse “safety” glasses that everyone is scrambling to get? I think these are a bad idea for several reasons:

For all these reasons, I recommend enjoying this eclipse with a projection viewer.

NOTE: Featured image of eclipse map is from https://www.space.com/33797-total-solar-eclipse-2017-guide.html#sthash.GsaXvkjN.uxfs.